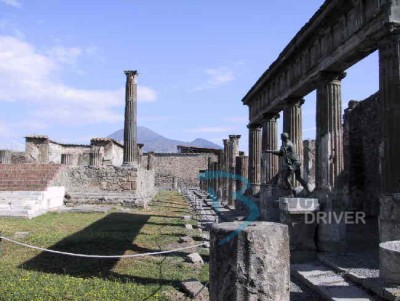 If you only have time to explore one location while it Southern Italy be sure to visit Pompeii, the ancient Roman city that was destroyed by the eruption of Mt. Vesuvius way back in AD 79. This stunning display of nature vs. human life is located in Campania, Italy, within close proximity to Naples. It is a major tourist attraction and has earned the distinguished title of a UNESCO World Heritage Site.

As the story goes Romans had taken control of Pompeii in 200 BC. On August 24th, 79 AD, Mt. Vesuvius erupted and buried the city in ash and soot, killing over 20,000 people. Unbelievably, the city was preserved by the intensity of the eruption, giving the world the unique opportunity to see what life was like all those centuries ago. Today Pompeii is a vast outdoor museum and excavation site supplying evidence and the mysteries of the ancient Roman settlement. The 79 AD eruption preserved, in detail, paintings, furniture, jars and even people, literally frozen in time, a truly remarkable sight to see.

Pompeii is a walking only site and while the ground can be rough to handle, is worth every footstep. You'll be walking over the original cobbled roads where carts and people of a proud Roman past carried about their business. If visiting during the summer months be sure to dress appropriately with comfortable shoes, light clothing, a hat and plenty of sunscreen and carry plenty of water. You'll want to set an entire day aside to visit Pompeii to really get a chance to see everything.

When you purchase you tickets to explore Pompeii you'll be given a booklet and a map that will help you get a chance to see all the important parts of this magnificent open air museum. Some areas that you will not want to miss include the following:

The Amphitheatre
The Amphitheatre is said to have been created in 80BC and is the earliest remaining permanent amphitheatre in Italy. It hosted gladiator battles and a variety of events, some involving wild animals.

House of the Vettii
The House of Vettii is said to have been home to two freed slaves who were brothers that became prosperous over time. The area features several frescoes of gods and mythological figures.

The Forum
The Forum was the thriving center of public life during Roman times and surrounded by most of the critical religious, business and government buildings.

We have only touched on the many natural miracles that you'll see when you visit Pompeii. You'll definitely want to spend at least a day here and be sure to bring your camera because you'll have plenty of fantastic photo opportunities here in this very special location in Southern Italy.

Reviews from our customers

BY FAR the best part of my 18 day trip to Paris and Italy! Our driver Luigi promptly arrived in a clean Mercedes and he was dressed to the nines and smelled expensive lol. He stopped wherever we wanted and opened doors like a perfect gentleman...

TMJSR - Shore excursion to Sorrento, Positano and Amalfi from Naples -

We had an amazing Shore Excursion from Naples to Sorrento, Positano and Amalfi. We were picked up by David on time and he was a great guide with a very good knowledge of the Amalfi Coast. We visited the three towns with an hour...

We just returned from a trip to the Amalfi Coast where we used three Benvenuto Driver services: - transfer from Rome to Marina del Cantone - trip to Positano, Amalfi and Ravello - return to Rome with a 2 hour stop in Pompeii ...

sammchick - Great Tour of the Coast with Tony -

First of all John was very easy to deal with to set up the tour, even though I waited until the last minute to confirm with him. Tony, our driver was excellent. He suggested a route that brought us all the way to Amalfi first and then back to the cruise port....

We loved our day trip with Tony along the Amalfi coast and to Pompeii. We sang all the way and Tony was a great guide who really looked after us . He gave us plenty of time to roam and shop around POSITANO and AMALFI snd picked the....

Giovanni with Benvenuto Tours provided excellence service when transferring from Naples to Sorrento. The following day he took me on a tour of the Amalfi Coast. He grew up in the area and was a wealth of knowledge....